Many of my intuitive paintings begin with a building up and layering of marks using a variety of tools. I use all kinds of items from around the house from toothpaste lids to slithers of wood to pencils to twigs, anything that will make a mark that is different to conventional tools like paint brushes. Of course I use these as well but the key with selecting different tools is that it’s possible to create variation in shape, thickness of line and mark density.

Acrylic paint lends itself to this way of painting as it dries quickly so it’s easy to achieve a rich base or back ground for work. The process enables a very free style of expression and as these photos show each little section of marks could become a painting in its own right. I usually alternate layers of warm colours and cool colours to maintain vibrancy and follow this by adding in contrast and translucence. I keep going in this way until I either want to commit to forms by searching for imagery hiding in the marks or I impose it if there is a message I am contemplating as I paint. It’s often a mixture of teasing out form and structure and a subliminal thought process where memories and emotions start to emerge. 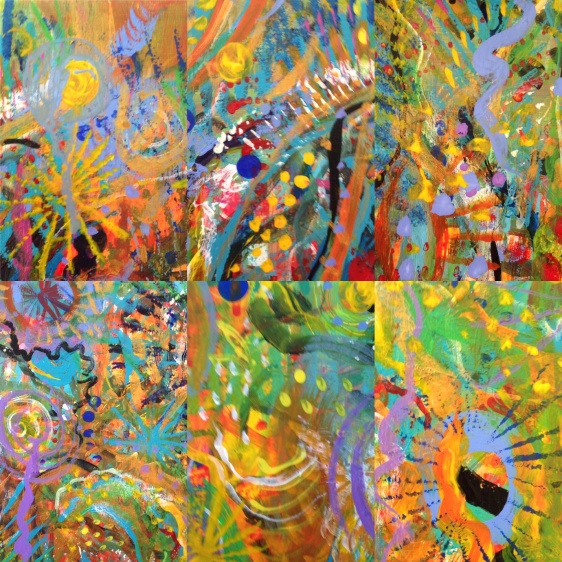 Some of this is conscious and sometimes I am surprised by the elements that jump out and add an entirely intuitive dimension to the work. I had for many years avoided figurative work because I found it difficult and was disappointed when an attempt looked nothing like the person I was trying to paint or draw.

Since working intuitively I have moved beyond this fear because the figures are imagined rather than drawn on reality. It doesn’t matter if the faces, bodies or features are representational because what I am trying to communicate is often based on the emotional or allegory rather than the representational. 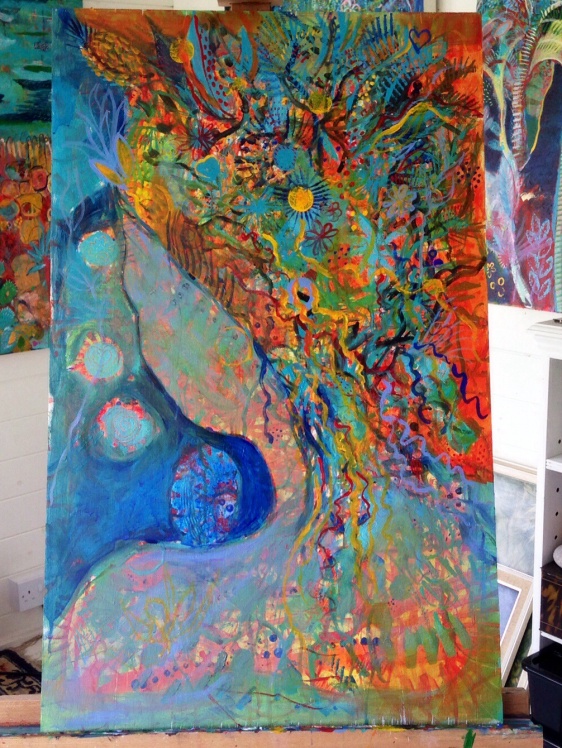 Mark making as a starting point has presented a new freedom and opened up the subjects I now feel confident to include in my paintings.

In this painting I worked on plywood which is more forgiving than canvas in the mark making stage. It’s possible to really press hard with pointy tools without worrying about making holes in the surface as is the case with canvas. The painting is all about the hair, a real bed head mess, that has offered a magical opportunity to pay with colour, line and texture.